A Mama Blessing: The strength of a circle of women! 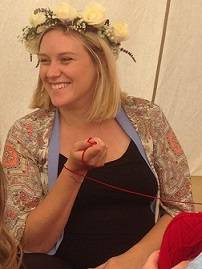 It was a beautiful summers day when 30+ women (inc a couple of little women) came together to share Mandy’s special Mother’s Blessing, a baby shower with a difference. Many of us will have attended a baby shower, which is more focused around playing games and bringing gifts for the impending arrival, but a Mother’s Blessing is very different. This is a special celebration, honouring the beauty of pregnancy and the transition into motherhood as well as Supporting and preparing the mother spiritually and emotionally for the event of childbirth.

We were nourished with good food lovingly prepared by Mandy’s husband Nick, whilst Mandy was having her bump beautifully decorated with henna. When she was finished many of the attendees also had their hands or feet decorated too. The women present all knew Mandy in a different way; There was family present, her Mum, Sister, Sister-in-law, many friends, Doulas, as well as some of the women she has supported during their early days of mothering. Every woman in the room had a special connection to Mandy, and was equally delighted to be sharing this special day with her.
During lunch each woman wrote her name on bunting that was to be wrapped around the birthing pool once labour had begun. Pledges of post natal support such as walking the dog, play dates with Dylan (Mandy & Nicks first born Son), a home cooked meal, were placed in a beautiful jar for Mandy to use once her baby was earth side, and birthing affirmations were written out on little pieces of card in a heart shape for extra support if required during labour.

Once everyone had eaten it was time to move into the glorious red tent that was set up in the garden, it was beautifully decorated with red voiles, cushions and white roses. Each woman made her way in so the Mother’s blessing ceremony could begin. Mandy looked glowing with her painted bump and crown made up of lavender and white roses, a true goddess.

Red yarn was used to join us all together, wrapping in one continuous piece around each woman’s wrist until we were all connected. Eyes were closed and energy, love and support were sent to Mandy. Each woman would keep her bracelet on now until Mandy gave birth, a candle was lit by each lady, finally lighting Mandy’s whilst a poem which was written by a friend, was read out . The candles would be taken home and once again re lit once Mandy was in labour, and to complete the blessing, a specially chosen bead by each woman was placed on a birth necklace, for Mandy to either wear or have close by during the last few days of pregnancy and at that magical time of birth. It was a truly beautiful way to honour this woman as she was about to add to her wonderful family unit once more. It was true woman to woman unity, energy and feelings impossible to be put into words and many tears of joy were shed. As each woman left, she knew that the next communication would be to light the candle as this magical process of birth was beginning.
Two weeks later, it was time for this tiny human being to make his way into this world, signs of labour had been building for a few days, and as the sunset on a glorious Sunday evening, Mandy’s labour began to build. The birthing pool was inflated and filled in preparation, the bunting with everyone’s names lovingly written on each flag, was wrapped around the outside of the pool, reminding Mandy that the circle of women were all there surrounding her in spirit. Candles were lit all around the birthing space lovingly by Nick including the large candle from the

blessing,which was surrounded by her crown, affirmations and birth necklace, creating a altar for her to look at whenever needed.

The gentle sounds of the ‘Sea of Serenity’ Hypnobirthing MP3 played in the background as Mandy moved instinctively as her body surged gently at first and then growing in power as night time descended upon us. It was time to send the signal to the circle of women, via the power of face book messenger;

‘ladies it is time to light those candles, and as you do, close your eyes and take a moment to send love, strength, and positive birth vibes Mandy’s way’.
One by one, pictures of candles burning brightly started being sent back to Mandy with wishes of love and support! You could feel the energy entering the birthing space, so so powerful! Ma

ndy would take the time to read the messages in between surges, giving her a full on Oxytocin rush, making the next surge so much more powerful and manageable. Being there to witness this level of support was like nothing I have seen before! This was how birth should be…Women showering each other with love at such a life changing event….simply magical, and powerful now even as I recall it!

A beautiful baby boy entered this world gently into his Mama’s arms a few hours later, surrounded by his Papa, Doula (me), Midwife(who arrived 5 mins before his birth) and the circle of women. His birth was everything Mandy and Nick wanted and worked hard for and I was honoured and privileged to be a part of that too.