Your Body Keeps Score – And It Always Wins! 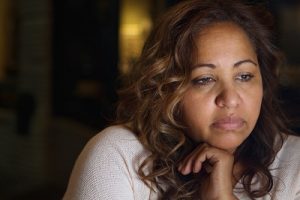 “The body keeps score, and it always wins!”    – Brene Brown

If you haven’t listened to her speak on vulnerability, shame and empathy, then go to You Tube now and do it! You won’t regret it!

So why do I love this quote! Well it pretty much sums up why I do what I do!

Just over 10 years ago, I was a broken woman! My marriage to my boy’s dad had fallen apart, and I was devastated. My absolute priority was getting my boys through this difficult time, as unscathed as I possibly could, but in the process, I stopped caring about me!

Why was I important, after all I had just broken up our family unit, (at the time I believed) I had single handily plummeted my kids into anger and sadness, and had done what I had categorically never ever wanted to do, and that was fail at marriage. My kids now came from a broken home.

I felt SHAME, I felt GUILT, and I felt ISOLATED

But to my children (and the outside world) I was FINE! I put a smile on, I ‘kept calm and carried on’. I was STRONG and I kept moving forwards.

I did not allow the inner thoughts and feelings I was experiencing to surface ever! ‘Nope back down you go’

And I, 100% did not consider my mental well-being a priority at that time! My sole focus was to keep moving forwards, to be a good parent, to not create any more unhappiness in the boys lives and make it as best as I possibly could.

I now know that I was punishing myself, and completely compromised my health and well-being as a result!

Shortly after this time I noticed that my body was exhibiting red, sore welts (hives) on a regular basis, they appeared on the soles of my feet (felt like I had a small stone in my shoe), my eyes and lips would occasionally swell up and the most sever reaction was a swollen tongue! The only thing that would reduce the swelling was an anti-histamine….it started out sporadically and slowly became a day to day ailment, and in turn became a stress factor in my life!

I would get frightened of having a reaction, particularly a swollen tongue as this was not a pleasant experience, and in the end, I begun taking anti-histamines daily, to prevent another outburst.

It took a few years for the diagnosis of Chronic Urticaria to be found, and when I looked at the cause for it, I became aware that Stress played a huge part.

I began documenting the times when I would have an outbreak (despite taking daily tablets), and it quickly became apparent that it was either when I was feeling stressed and didn’t allow the emotions or say what I needed to say (suppressing) or when my body was stressed (unwell). It was so interesting that the only area that I would have the swellings was my tongue- not using it to speak my truth!

10 years on and chronic urticaria is something I have learned to live with and manage because it can either be with you for 3 weeks, 3 months, 3 years or 30 years! There is no cure! But I can honestly say I am thankful to Urticaria as it has taught me so much about myself and how awful I WAS at looking after my emotional well-being.

I had become so good at suppressing my emotions and words, that my body had become unwell! It had simply had enough of the pressure I was putting it under. I was so busy making sure that everyone around me was fine, that I hadn’t stopped to think of the immense stress I was causing on a cellular level throughout my body, until the time I was forced to stop and listen!

How many of you reading this suffer from;

……maybe it has even got to the point that your menstrual cycle has become completely erratic or in some instances, stopped all together, which for anyone struggling to conceive is devastating!

All the above are signs of stress!

The body literally shouting at you to please stop and listen!

It took me a while to finally start to listen! But when I did, the symptoms were so much easier to manage and became a useful tool for me. When I would feel it coming on, I would take a step back and reflect on why it was happening. What did I need to do to support my body? Maybe a situation had arisen and I was not taking ownership of it or even addressing it, or it was that my immune system was low, and what could I do to improve that.

I say frequently that the Mind-Body connection is completely underestimated (and has been by myself in the past).

Often, we turn to medicine for the cure, when there are so many other paths we can walk either alongside the tablets or in place of them.  If we are just always looking for the quick fix, to deal with the issue presenting today, we can miss what we need to look at to prevent it from happening in the long-term future.

Therapy has, without a shadow of a doubt, helped me to heal the internal wounds of years of not supporting my mind/body. Be it EFT (emotional freedom technique) and/or Hypnotherapy.

I am always listening to what my body is telling me, because I know that one way or another it will communicate to me and I would rather not get to the point of dis-ease before I take note.

“The body keeps score, and it always wins!”

How is your body talking to you at the moment, and are you ready to start listening?

Are ready to deal with the stresses in your life, or maybe even discover what it could be that is causing it!

Maybe you have been trying to conceive for a while now, and you recognise the symptoms above!

Drop me an email!